Bacon, the way it’s supposed to be.

BACON, THE WAY IT’S SUPPOSED TO BE.

Chances are the bacon you’ve been buying is under-smoked, over processed and – no matter what the package says –
too thin. If you’re craving something more – hand-cut cubes of belly fat tucked into a smoky cassoulet or the
crisp crunch extra- thick slices bring to a turkey club -you’ll be stoked to find what’s available from Baker’s Bacon.

I developed the uniquely sustainable, high-quality processes behind Baker’s Bacon to provide professional chefs
with the ultimate option to enhance their creations. We source heritage breed pork, humanely raised without crates
and fed a 100% vegetarian diet.

Previously sold only to high-end restaurants, our artisan products are now available
for you to buy online and work magic in your own kitchen. Enjoy!

British-born Chef Tony Baker launched Baker’s Bacon in 2011 after a long and successful career both in England and California.

Tony’s passion for working with his hands, sourcing the best ingredients and making food with care is ingrained in him. He remembers his days as a Boy Scout, which sparked his interest about pursuing a culinary career after he took a baking class.

Classically trained in the culinary arts at Brunel Technical College in Bristol, England, Tony began his career at multiple fine-dining, Michelin-starred restaurants around London including L’Ortolan, Lucknam Park Hotel and Hintlesham Hall. Hospitality skills clearly run in the family as his oldest daughter currently works at the Lucknam Park Hotel.

In 1994, he felt the pull to hop across the pond and began working for Montrio Bistro, part of the Downtown Dining Group, in Monterey, California. During his 25-year tenure there, Tony thrived working with the bounty of fresh California ingredients and local farmers. He also partnered with the Monterey Bay Aquarium’s Seafood Watch program and drove Montrio to become a certified Green Restaurant with the Green Restaurant Association, which evaluated all levels of sustainability for the business. While there, Montrio was consistently voted the “Best Restaurant in Monterey” by local readers’ polls.

Now, he employs that same artistry and technique to the small-batch, top-quality dry-cured and double-smoked bacon he makes using heritage breed pork for Baker’s Bacon. He began making bacon for the three restaurants in the Downtown Dining Group (Montrio, Tarpy’s and Rio Grill) and then expanded into wholesale distribution, selling his bacon to other chefs around the country.

“The market is saturated with mass-produced, watery bacon, and I wanted a high-end product that met my quality expectations,” he says. “Great bacon should have just the right balance of salt, sugar and smoke. Our bacon takes me back to my English roots.”

With multiple awards to his name, including the United Fresh Produce Excellence in Foodservice award in fine dining, the American Culinary Federation’s 2018 “Chef of the Year” and Edible Magazine’s “Chef of the Year,” Tony has also been invited as a guest chef for several events including Obsession at Northcote Manor and the prestigious Pebble Beach Food & Wine.

He lives in Salinas, California, with his wife and his favorite way to eat bacon at home is in a “Bacon Butty” – a traditional English sandwich of a soft flour roll, Kerrygold salted butter, back bacon and a squirt of HP sauce. 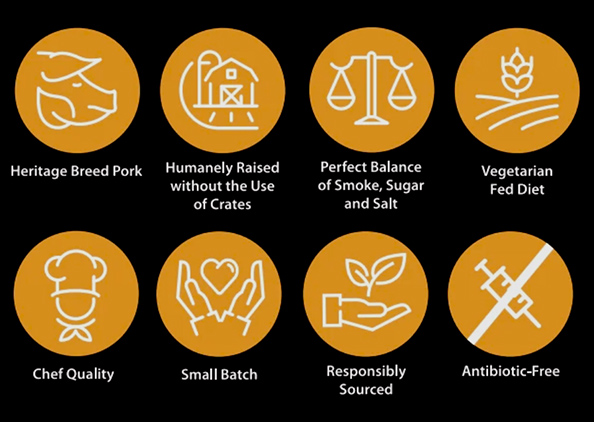